Warning: "continue" targeting switch is equivalent to "break". Did you mean to use "continue 2"? in /homepages/22/d165974365/htdocs/clickandbuilds/AmericanMusicCampsBaltimore/wp-includes/pomo/plural-forms.php on line 210
 Faculty – American Music Camps Baltimore
Skip to content

Yoshiaki Horiguchi has been acclaimed by the Baltimore Sun for putting on a “dazzling display of dexterity and panache,” and featured by the Examiner in a “Must Watch Video”. Yoshi is an active double bassist, pedagogue, and educator in the DC-Baltimore area. Although classically trained, his endeavors span across a broad spectrum of genres having performed with the National Philharmonic, Baltimore Boom Bap Society, Apollo Chamber Orchestra, The Hungry Monks, Great Noise Ensemble, Classical Revolution, and more. Yoshi is currently the double bassist in Trio Jinx, the genre-crossing, classical-core trio.

Yoshi’s pedagogy research has been recognized by the International Society of Bassists and it focuses on the development, philosophy, and technical teaching points in the George Vance double bass method. Yoshi is also certified in the Mark O’Connor string method and has studied the Suzuki string method under Christian Tremblay and Bai-Chi Chen from the Peabody Preparatory. His passion and drive for students to study pedagogically beneficial and engaging music pushed him to arrange works that are being performed throughout the United States.

Yoshi graduated with honors as a Linehan Artist Scholar at the University of Maryland, Baltimore County where he graduated with a Bachelor’s Degree in double bass performance and music education. During his time at UMBC, he also earned his teaching certificate and won the 2012 concerto competition. He then graduated as an Aegon USA scholar at the Peabody Conservatory at the Johns Hopkins University for his Master’s Degree in double bass performance and pedagogy and he is currently pursuing his Doctorate of Musical Arts at Peabody. Yoshi proudly hails from the studios of Ed Malaga, Jeff Koczela, Laura Ruas, Paul DeNola, and Paul Johnson. In his free time, Yoshi enjoys wearing primary colors, playing ultimate Frisbee, swing dancing, and expanding his sock collection.

Rob Flax is an award-winning multi-instrumentalist, composer, and educator from Evanston, IL with a playful heart and an open mind. He has performed nationally and internationally with groups of many different styles, including opening for B.B. King and Tower of Power, playing viola and violin with the Trans Siberian Orchestra and YouTube star Jacob Collier, upright bass in an Argentine tango ensemble, mandolin and fiddle in various bluegrass bands, electric violin in several rock bands, collaborations with modern dancers, and more. As a composer Rob has written music for choreographers, film (including work on the soundtrack of James Franco’s film As I Lay Dying), and several original projects. Rob is a recent graduate of the New England Conservatory (M.M. 2012 – Contemporary Improvisation, Music In Education), and he currently lives in Boston, MA. For more, check out www.RobFlax.com 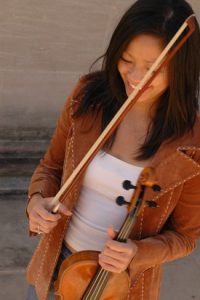 Violinist Melissa Tong is quickly gaining a reputation for her finesse and versatility, performing everywhere from Boston Symphony Hall with Savion Glover to Lincoln Center to one of the last remaining juke joints in Mississippi. Recent performances have taken Ms. Tong throughout the U.S. accompanying violinist, fiddler, and composer Mark O’Connor on piano, abroad to Switzerland, Japan, Mexico, Jamaica, and the U.K., and on the airwaves with pop singer Sara Bareilles.

An active musician in NYC, Melissa is a member of the New York based Artemis Chamber Ensemble and plays regularly with numerous orchestras in the tri-state area. On the new music front, she has collaborated with the Flexible Orchestra for several commissioned world premieres, and has worked with several ensembles at the forefront of the contemporary music scene including Newspeak and the Praxis Quartet. Ms. Tong also makes frequent appearances with a multitude of pop, rock, and folk artists, including Sara Bareilles, Young the Giant, The Album Leaf, Wakey!Wakey!, and Vienna Teng, and can be heard in the recordings of artists Elizabeth and the Catapult, Ari Hest, The Spring Standards, Alex Wong, and Alex Berger, among many others. In addition, “Railroad Nails” Tong is half of the North Mississippi Blues duo Pork Chop Willie, with whom she also sings and plays piano.

Melissa attended the University of Southern California on full scholarship, where she received her Bachelor of Music degree in Violin Performance under the tutelage of Los Angeles Philharmonic Principal Concertmaster Martin Chalifour, as well as a minor in Communications and the Entertainment Industry.

Ms. Tong is a dedicated teacher and is certified in both the O’Connor and Suzuki Methods. She is on faculty at the Third Street Music School Settlement in lower Manhattan and Chamber Music Center of NY, as well as the Mark O’Connor/Berklee College of Music Summer String Program in Boston. Melissa recently founded “String Jams!,” a series of jam sessions for students and beginning improvisers.

When not rehearsing, performing, recording, or teaching, Melissa can often be found fiddling away at a bluegrass jam session. She resides in Manhattan, where she happily feeds her addictions to coffee and yoga.